The lack of blog entries may lead you to believe that the Surfrider San Diego Chapter's Beach Preservation Committee has been inactive, but it most definitely NOT TRUE! In the past few months we have been busy submitting written comments, attending and speaking at public meetings, and keeping up with local and regional projects that are in various stages of planning. Two of the big issues we are concerned with at the present are the Solana Beach LCP (more on that later), and SANDAG's Regional Beach Sand Project II, which will be discussed below.

San Diego County beaches have been eroding for many years. In general, this is not a bad thing for beaches, after all, erosion is a natural process. In the past, the erosion was offset by an input of sand from rivers (the Santa Margarita river north of Oceanside being the greatest contributor), and erosion of seacliffs. Unfortunately, both of these sources have been reduced as coastal development interests have superseded environmental and recreational interests. River deposits are blocked by marinas and large structures (such as the Oceanside Harbor jetty and Del Mar jetty) and seawalls have stopped the sand typically eroded from bluffs from reaching the beach. This video explains it well:

Restore the Shore from marty benson on Vimeo.

So what can be done to ensure the beach is preserved? In recent years, the practice of beach nourishment (terminology preferred by coastal engineers and managers) or beach dredge and fill (my preferred terminology) has been utilized as a "soft" alternative to hard structures like breakwaters and groins. Beach nourishment is at best a temporary measure, and in some poorly designed and executed cases, can be actually worse for the beach. Overall, the Surfrider Foundation has a policy which advocates planned or managed retreat and beach nourishment as a "last resort". This is similar to the Surfrider Foundation San Diego Chapter's policy. But the reality is that most coastal municipalities do not want to discuss retreat and beach nourishment has been, for the most part, the main coastal management tool that is currently used.

The San Diego Association of Governments (SANDAG) is the lead agency that handles regional beach projects in San Diego county, and managed the mostly successful Regional Beach Sand Project I (RBSP I) in 2001. This project grew in response to the US Navy's attempt to use San Diego Bay dredge material as beach fill failed due to the presence of munitions. The successes and failures of RBSP I were extensively documented by SANDAG and Scripps Institution of Oceanography's Southern California Beach Process Study, and the project is viewed by most as a successful example of a large scale beach fill project. 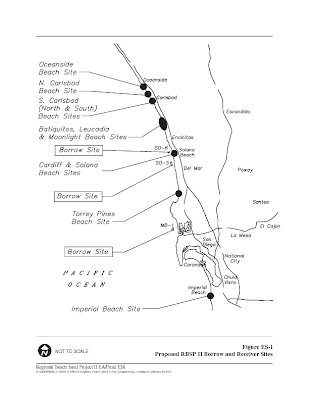 In response to the continuing issue of beach erosion, SANDAG has been planning the Regional Beach Sand Project II, which aims to be similar in scope and detail to RSBP I. Most of the sand volumes and receiver sites are the same with RBSP II as they were in RBSP I. In general, the San Diego chapter approved of RBSP I and RBSP II. SANDAG made an admirable effort to get ahead of the issue, and reached out to many local environmental groups, including Surfrider, during the scoping of the project.

In February the draft Environment Imapact Report (DEIR) was released and opened for public comments. The San Diego chapter did prepare extensive comments, and we were the only local environmental group to do so. Our main issue with the DEIR was the reliance on a numerical model, GENESIS, that was used to evaluate the fate of the beach fill over a number of years. The model did not include the effects of cross-shelf transport, which is the major contributor to removal of sand from the beach, and did not include the effect of storms, which are responsible for forcing a majority of the cross-shelf transport. Additionally, there was mention that in beach areas nearby offshore reefs, there was a possibility for the reefs to be temporarily covered by sand after it was placed on the shore face. This was unacceptable to us, even on a temporary basis, as the effects to surfing reefs would be noticed by many surfers. To make it worse, the DEIR did not include any program to monitor the potential coverage of reefs or the effects of the additional sand to surf spots. We also expressed some concern that the amount of sand to be placed was not explicitly listed, as the DEIR listed 3 alternative scenarios for the amount of sand to be placed.

After our comments were received and replied to by SANDAG, the preferred alternative for the project was listed. The table below shows the original amounts: 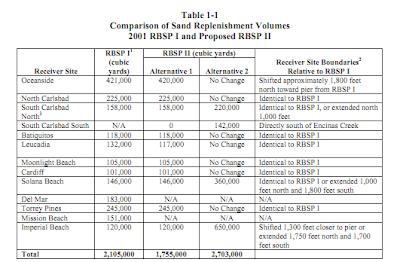 SANDAG choose Alternative 2, which was similar to sand placed in RBSP I, but included a large increase around Solana Beach, which is home to a number of fine reef breaks (ask Jim Jaffee for exact locations :)). We still were unhappy with the explanation of how the sand volumes were calculated, and felt there was still a threat to sand covering the reefs. After a new round of comment letters to SANDAG, correspondence with the SANDAG board, and oral comments from San Diego Chapter's Campaign Coordinator, Julia Chunn, the volume of sand to be added in Solana Beach was decreased by over 200,000 cubic yards, bringing things back in line with RBSP I values. To us, this was a victory, as SANDAG was very concerned with our comments, and revised their sand placement based on our input.

While the sand reduction was very favorable, we were still concerned with the lack of explanation of the monitoring of the fate of the sand after placement and how it would effect surf spots. After SANDAG approved the DEIR, they needed to go in front of the California Coastal Commission and present their case to get the necessary permits for the project. We supplied written comments to the CCC in favor of the project, but expressed our reservation regarding the lack of surf spot monitoring. At the meeting, Surfrider National provided legal intern Kirk Tracy to provide oral comments. The commissioners were open to the idea of surf spot monitoring, and added it as a requirement to the permit for SANDAG to carry out the project. Another victory.

So, look forward to the launch of a Surf Spot monitoring program through out San Diego County coming soon.
Posted by TC at 12:48 PM