The CCC annd authorized Local Coastal Plans should not permit seawall construction on an eroding coastline when it would threaten recreational access to the beach protected by Coastal Act Sections on Public Access 30210-30214 and Recreation, Sections 30220-30222 . 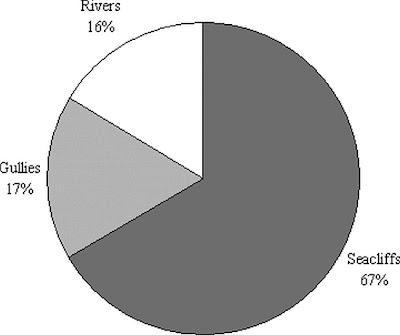 Figure 10. Estimated percentage of beach-sediment contributions to the Oceanside Littoral Cell for the study area between April 1998 and April 2004 (a statistically dry period). (from Adam P. Young, Scott A. Ashford (2006) Application of Airborne LIDAR for Seacliff Volumetric Change and Beach-Sediment Budget Contributions. Journal of Coastal Research: Vol. 22, No. 2, pp. 307-318.)

I've been thinking a bunch about this topic over the past few weeks as a long string of larger than normal surf have coincided with some very high tides. Easily every beach I've seen in the past two weeks has shown signs of erosion. Also see Andrea's posts below which do a great job of documenting the problems in Oceanside. The addition of the heavy rains have complicated things even more, and where they are not restrained by seawalls, beach cliff erosion is very active. If you've been down the paved trail to Black's Beach, you can see this pretty clearly.

In 2005, UCSD grad student Adam Young and his advisor Scott Ashford published "Application of Airborne LIDAR for Seacliff Volumetric Change and Beach-Sediment Budget Contributions" in Journal of Coastal Research. The important result from this work is summed up in the figure above. Classical thinking had been that rivers provided up to 90% of beach sand in the Oceanside littoral cell. Young and Ashford's work found that seacliff (or bluff) erosion contributed 67% to beach sediment in the Oceanside cell.

The reception of this work was varied. Many who fight against seawalls, saw this as a concrete (pun intended) example of the detrimental effects of seawalls, which are blocking sediment into our littoral cells. Obviously, the seawall advocates were not so pleased and many were quick to dismiss the work.

"We think it's pure hogwash," countered Paul Santina, president of the Beach and Bluff Conservancy. (from Study: Bluffs contribute most of the sand on local beaches, By: Paul Sisson North County Times, Oct 16, 2005)

Most of the scientific criticism about Young and Ashford's study was based on the short period of time that their analysis included. They looked at a six year period of time, which also was during a dry period. Six years in the geological sense is short, but their methods are accepted as valid by many in the coastal research community.

To help put this academic research into a real life example, head down to Black's Beach or any of the beaches in front of non-armored bluffs. You're likely to see patches of large amount of sediment eroding off the bluffs (bluff failures), which will soon make it's way into our littoral cell.

Here are some additional links regarding Adam Young's work: