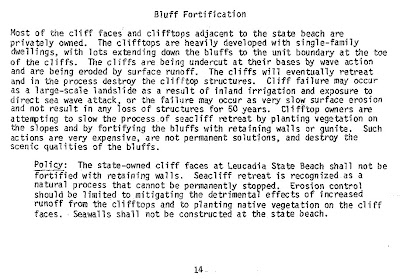 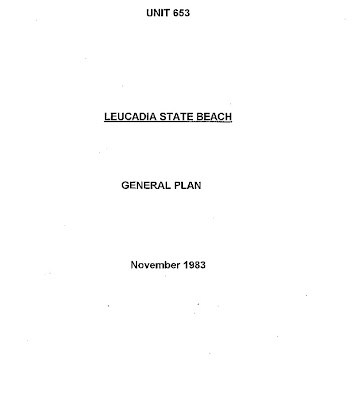 Encinitas tried to get a seawall approved and funded by taxpayers at Beacon's Beach. They spent $500,000 to study it. They produced a Draft EIR that said the impacts of the seawall would block access to the beach and impact recreation.
Even worse, they neglected to obey the General Plan of Leucadia State Beach home of Beacons in proposing the seawall alternative in the first place.
It is hard to understand which part of the General Plan Policy "Seawalls shall not be constructed on the State Beach." they did not understand? Maybe that was confused with the Policy that said "The state owned cliff-faces at Leucadia State Beach shall not be fortified with retaining walls."
In 2003, Surfrider Foundation asked the City to pursue alternatives to the seawall to improve access to Beacons. In 2006, we submitted public comment arguing the impacts and issues with the seawall consistent with the General Plan and results of the DEIR.
It is funny to watch the politicians point fingers when they waste the taxpayers money and worse missed a 9 year window to design the right project for Beacons. We told them in 2003 and again 2006 as well and they ignored us.
I am adding a summary I made in my comments to the DEIR in 2006 to show what we tried to do:
"In summary, it would be ill advised under such circumstances to recommend alternatives that require a statement of overriding considerations such as the seawall alternative. The environmentally superior alternative with stairs, some sand replenishment and relocation should be further refined and studied. I am available to help study such an alternative. Surfrider Foundation has offered as far back as the meeting held 6/04/03 (Schmidt Design Group Meeting Notes available on City website) to help with a softer solution than proposed. At that meeting the City stated that soft solutions could garner the state funding required to improve Beacon’s Beach yet no effort has been made to pursue such an alternative in earnest.

Thank you for your consideration of these comments. If you have any questions, please do not hesitate to contact me.